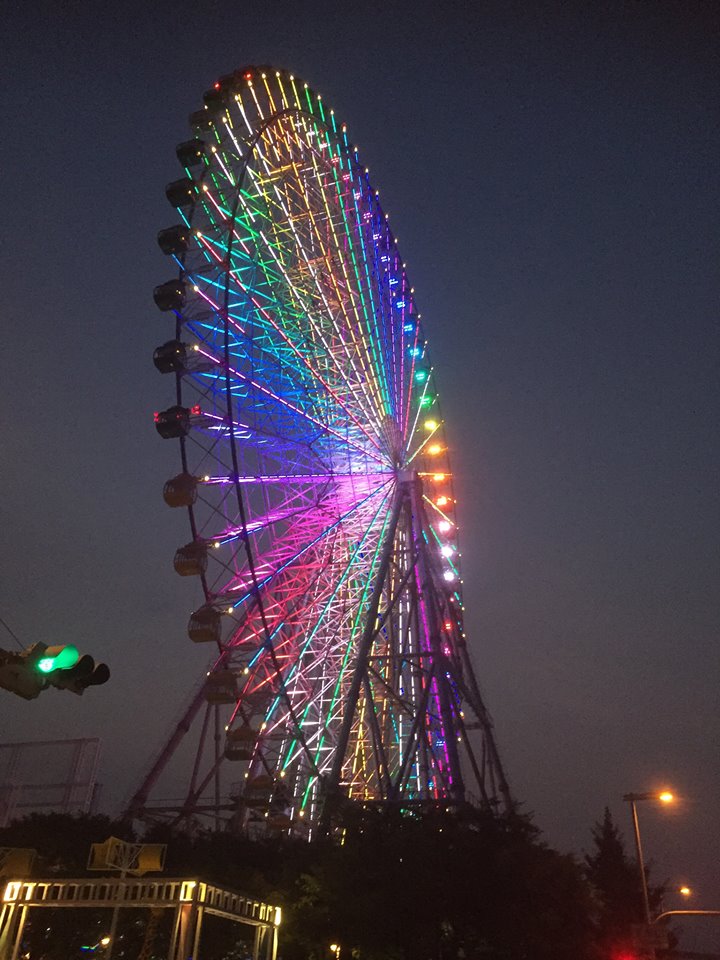 Osaka is a huge city. You can’t really understand how huge it is until you get here and see the map of stations and all the different public and private lines for yourself, then board train after train flying over endless big city landscapes. It’s all quite daunting, but it somehow connects up and with the aid of a site like hyperdia.com, you can just about make your way through it. Coming from Nara, it came as quite a shock to me.

My visit was just a short one before catching a flight to Taiwan the next day, but I had decided I’d like to see the bustling centre around Shinsaibashi and the American Village (amerikamura). Shinsaibashi was a massive, crowded arcade that seemingly went on for ever. I got a delicious cold (tsumetai) ramen from a vending machine place there and that combined with about ten minutes of pushing through crowds passing designer shops I’d never dream of going into was enough for me.

The American Village was a little quieter (but still busy) and not under cover, with Triangle Park ‘square’ as its centrepiece. Skater and baseball fashion rules here, but I wasn’t wearing the right uniform, so didn’t linger too long. That left me with some extra time, so I remembered what everybody had advised me to do before coming, which was to visit the aquarium.

I’m not sure if I’d ever been to an aquarium before (perhaps as a small child, perhaps not), although I had definitely seen dolphins in a dolphinarium in Lithuania. The ‘Kaiyukan‘ is definitely worth a look, with its wonderful tanks of seals, dolphins, whales, penguins, sharks, jellyfish, otters and other sea creatures. One of the highlights was the fish of the Great Barrier Reef area and I lay on the ground with others to peek under the water in hypnotic amazement as the colourful schools swam by. Then there are the whales in the main Pacific tank. Watching them move is something difficult for your brain to fathom, their massive size hard to comprehend. At the end you’re allowed to touch baby sharks, but not on the mouth.

Afterwards, I met up with a friend from an amazing hostel in Malaysia I had stayed at a couple of years previously. He was kind enough to put me up for the night in his spare room/classroom. Unfortunately, he was just getting over jet lag from a trip to the States, but he still found the strength to take me next door to his mother-in-law’s bar for drinks and food. This had the feel of real small town Osaka, even though Tennoji was not that far away and it was great to get a taste of life in this little pocket of town and to hear the differences between people of the region compared to others. Osaka residents are thought of as the most gregarious, friendly and outgoing of the Japanese and it was clear that this was the place for him!

After breakfast I headed off to the airport to catch my outrageously cheap flight to Taiwan. Thank you, Peach. Next time I hope to make it to Shinsekai, which means ‘New World’ in English, but is in reality anything but. It sounds a fascinating part of town.

Update (2018): The castle is also well worth a visit if you have time. I stopped there on the way back from the Philippines.