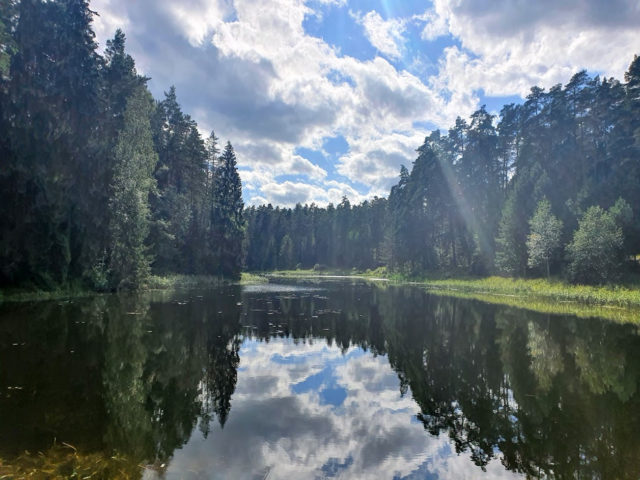 Our dream had been to get out to the “real” countryside of Estonia since our arrival in Tallinn, so after a couple of weeks in Tartu, we caught one of the few trains a day to Elva. It had been recommended as a beautiful place to visit by my professor and it didn’t disappoint.

From the old wooden train station, we ambled towards one of the two central lakes the town boasts, stopping to buy some supplies at the local store on the way. After walking past the football pitch, we picked our way through a clump of denser forest, climbed over an abandoned ski jump and reached the second lake, far more deserted than the first, with a bored lifeguard the only other human in sight.

A small snack on the beach consumed, we set about traversing the residential lanes, all the houses immaculate with extensive, perfectly manicured lawns. As usual, we discussed getting one of these houses and living this bucolic idyll; an attractive idea if we were to settle in Estonia one day.

Our walk next took us to the south of the town, from whence many walking paths stretch out deeper into the wild. Part of our planned route turned out to be a rally track (a very popular sport here as well as in Finland), which had been used in a recently held WRC event. A little concerned it may have still been in use at the time of our walk, we stayed to the edge of it until we saw a couple of locals happily walking their dog up the centre.

Having a lot of time on our hands before the next (only) train from Elva, we decided to walk part of the way back to Tartu under our own steam. The beginning was fairly simple as the path we took shared the route of the Tour de LatEst, a cycle route that crisscrosses Latvia and Estonia, but we soon reached a point where we were forced to head offroad.

The route I had opted for on my trusty maps.me app existed for just long enough to get us close to our planned destination station, but just far enough from the previous one for it to be too late to go back when it stopped…existing. With no decent alternative, we thrashed our way through a bit of high grass before coming out on a track through glorious fields of crops.

Our relief was short-lived, however, as we soon came across a “NO ENTRY” sign barring our way. It was placed curiously, in the middle of a field, with no other lanes or paths as far as the eye could see. With a sigh, we ignored it and had nearly reached the regular (legal) road when we saw the farmer. He was mowing his exceptionally long “drive” and heading straight towards us.

Time to feign total ignorance! I smiled and said “Tere”, making a gesture inquiring if we were heading in the right direction. A disgruntled grunt was the “reply”, but fortunately there were no further repurcussions. Mow problem.

Or rather Nõo problem, as it was in the tiny borough of Nõo that our wandering came to an end, with an ice-cream to celebrate. An unassuming little place with the obligatory disc golf park, another Estonian obsession. Time to head back to the “metropolis” of Tartu, with lashings of Vitamin D in our skin and fresh country air in our lungs.