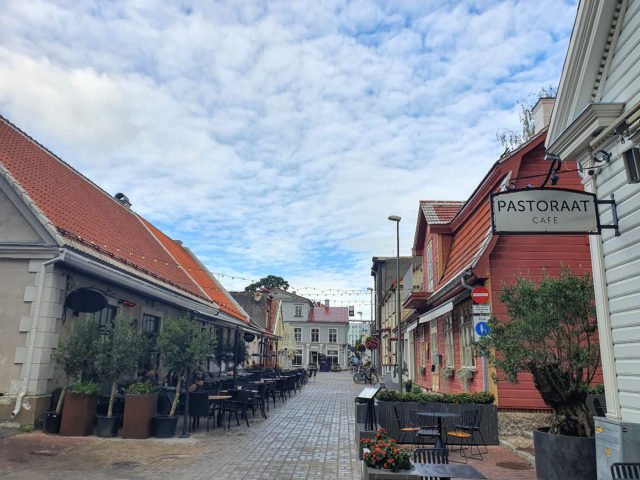 With a week of our Estonian trip to go, we said goodbye to Tartu and headed to the “summer capital”, Pärnu. It’s a small city on the west coast where Estonians flock to squeeze the most out of the limited summer sun. We arrived at the beginning of September, so it was mostly deserted…and pretty chilly.

I had had a great deal of discussion with my wife about the wisdom of booking a garden cabin, considering the plummeting temperatures, but she had her heart set on one not far from the beach. So a cabin it was. Our AirBnB host expressed a degree of shock, offering a small apartment next door for the same price. However, on confirming our intention, he decided not to argue the point, saying we could move if we changed our mind.

Which we did. One freezing night under heavy blankets combined with a consistently leaky pipe later, we moved into the cosy little apartment our host had suggested. The host made no fuss at all, perhaps because he was the shiest person I had ever met.

Estonians in general go out of their way not to disturb you. If you are the kind of person who doesn’t like to be approached, then this is definitely the place for you. Our host, however, took it to another level. While he quickly came if we needed something, he vanished without warning as soon as his task was complete. We saw him near the house a few times, but he always quickly hid, seemingly desperate to avoid a chat. We were not offended, just a little amused.

Pärnu is a classic seaside resort with wonderful views out onto the Baltic. The old town is picturesque and full of greenery and boasts a legendary pizzeria called Steffani. Be sure to stop here and enjoy a beer in the garden. A beautiful mix of woodland and meadows, with cows grazing right up to the seashore, extends to the south. This would become our running route for the week, offering us stunning sunsets.

The main beach is long and flat as a pancake. Just alongside it is the stadium of second flight FC Pärnu. Naturally, we jumped at the chance to tick off yet another Esiliiga stadium. This was by far the most impressive we had been to in terms of the grandstand and also had the highest attendance of the matches we had seen. The match finished 2-2, but we spent much of our time trying to stay in the only patch of sun on offer.

To get the early autumnal chill out of our bones, we decided it was a good time to try Vana Tallinn, a spicy rum that is Estonia’s most famous tipple. It is a good way to warm yourself up quickly coming in from the cold, but a little too sweet (and strong) to consume in great quantities.

Before leaving, our final mission was to get a Covid test, with our departing flight leaving a couple of days later from Tallinn. The testing “centre” consisted of two ladies wrapped up in PPE in a tiny darkened room with a small computer flickering in the corner. It seemed a very dismal way of making money, but I guess somebody had to do it. I just wished (for their sake) a little more thought had been given to the decor.

Pärnu would certainly be interesting to see in (real) summer, but it was also very pleasant to have the vast expanses of coastline nearly to ourselves. We will be back for more pizza one day!