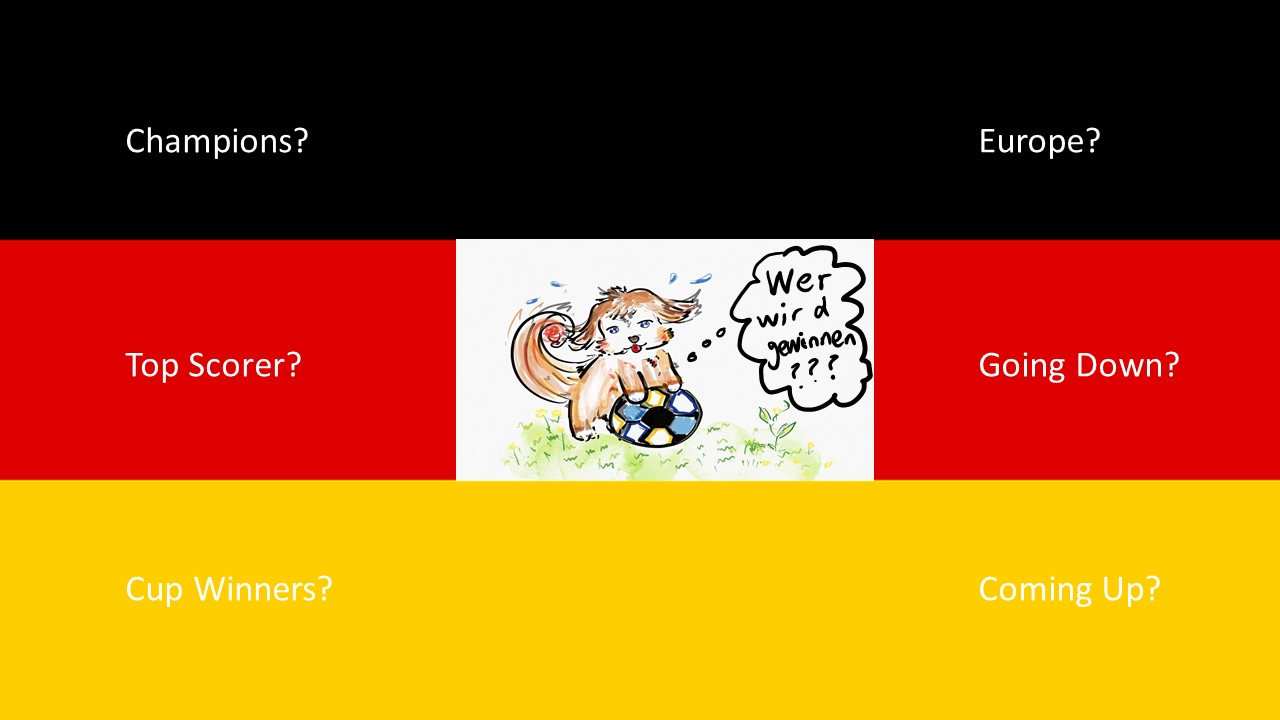 CHAMPIONS: BAYERN MUNICH
Well, obviously. The perennial favourites will make it a tenth consecutive Bundesliga title completing a decade of domination of the German top flight. They have a six point safety cushion with seven games to go, so the Meisterschale ought to be a formality.

CHAMPIONS LEAGUE: BORUSSIA DORTMUND, BAYER LEVERKUSEN, LEIPZIG
Borussia are miles clear in second and have no other distractions. Bayer are also out of all other competitions and will finish third. Leipzig must balance the race for fourth with Europa League commitments, but are in the best form of the three main contenders.

EUROPA LEAGUE: FREIBURG, KÖLN
There will be more European football next season for the boys from the Black Forest, who have gone from strength to strength under Christian Streich. They will be joined by the Billy Goats of Köln, who will go on a late surge on the back of Anthony Modeste’s sparkling run of form.

CONFERENCE LEAGUE: HOFFENHEIM
The late run by Köln will push Hoffenheim down to seventh, but that should be enough for a spot in the Conference League, provided Union or Hamburg don’t win the Pokal. The Kraichgau outfit’s inconsistency will see them miss out on the Europa League.

RELEGATED: GREUTHER FÜRTH, ARMINIA BIELEFELD
Fürth have looked doomed from day one, although they have been able to turn performances into points more frequently in the second half of the season. Arminia have lost four on the bounce and look unlikely to turn things around on current form.

PROMOTED: ST. PAULI, WERDER BREMEN
The Pirates have been out on top nearly all season and will love playing a division above city rivals Hamburg for the first time in Bundesliga history. Werder Bremen will take second to secure a rapid return to the top flight for one of Germany’s traditional big hitters.

RELEGATION PLAY-OFF: HERTHA BERLIN vs DARMSTADT
Hertha ended a terrible recent run of form with a surprise 3-0 win against Hoffenheim last time out, but it won’t be enough for them to escape a relegation play-off. Darmstadt have an easier run-in than Schalke or Nürnberg, so expect to see them challenging the capital side over two legs.

DFB POKAL WINNERS: FREIBURG
Remarkably, the only semi-finalist to have won the cup is the only 2. Bundesliga side left, Hamburg. Leipzig are favourites and will come through a semi-final with faltering Union. But Freiburg will defeat them in the final with Nils Petersen scoring his 100th goal for the club in a classic super-sub performance.

TOP SCORER: ROBERT LEWANDOWSKI
Who else? The Pole has once again been posting unreal numbers. He is also out on top of the Champions League goal-scoring charts. His 339 goals for Bayern put him 225 goals behind Gerd Müller. He would need about four of five seasons to get there at current pace. He couldn’t…could he?