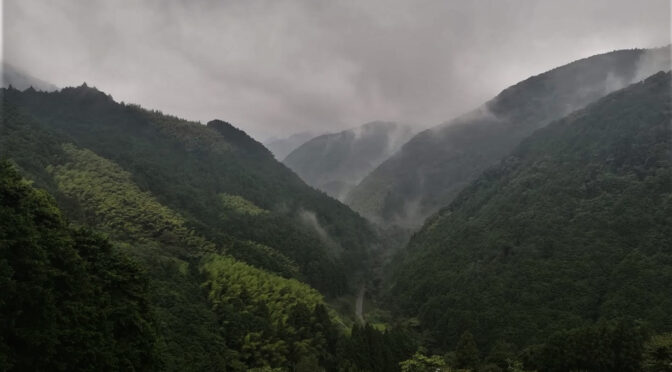 Shizuoka City may not be huge in terms of population, but the area that it covers is vast. Whilst most people live at sea level or slightly above, its highest point is a whopping 1051m, meaning it rises to a higher altitude than the entirety of England. It’s certainly a different world up there if you choose to hike to the top.

Dragon Claw Mountain, made up of the twin peaks of Healing Buddha Peak 薬師岳 (Yakushidake) (1051m) and Transcendent Wisdom Buddha Peak (Monjudake) 文珠岳 (1041m), is visible from much of Shizuoka. It is the city’s northern guardian, with the Japanese Alps lying in wait just behind. If you’re planning on getting there under your own steam (with no engine), it’ll be a whole day’s outing.

I had been up four years previously with a group of friends in a hire car. We’d parked at Hoizumi Shrine and then walked up the well-maintained albeit steep combination of steps and path to Yakushidake then Monjudake and back again. This time, however, my girlfriend and I would be getting there via a combination of old mamacharis (city bikes with a basket) and our own two feet.

We set off at around 10 and made our way up through Sena along the lovely Nagao River all the way to the picturesque village of Hirayama (平山). Although there is a discernible gain in altitude, it’s possible to make it up without gears. Only one or two brief sections actually require pushing. As we were planning on doing a loop, we left our bikes in the village park and turned left towards the Sokusawa (則沢) trailhead.

There’s a box there (as there is at every trailhead) for you to leave your hiking plans for the day. This is supposed to help the rescue team if you have an accident/get lost. The first part of the climb especially was a lot hairier than we had anticipated, with multiple ropes (often necessary) to help you skirt along the edge of rocks without taking a tumble. Many of these more dangerous sections can be avoided if you take the car road up as far as it goes before transferring to the trail.

After a good couple of hours climbing, we reached the Sokusawa fork and turned right for the final brief climb to Monjudake. Unfortunately, it was far too foggy to get any views and after a light lunch on top of the world, it started to rain. This developed into a massive downpour as we reached Yakushidake, before descending to Hoizumi Shrine.

At this point the rain was so heavy and the fog so thick we could barely see a metre ahead of us, but we needed to keep going to make it back to our bikes. Instead of taking the hiking trail (we didn’t want to risk something similar to what we’d done in the morning in slippery conditions and zero visibility), we decided to stick to the road. There was no traffic at all and we were able to fill up a few water bottles with the beautiful fresh water available next to a torii at head of the old trail we had opted not to take.

Gradually, the storm subsided and we could enjoy the beautiful deep green of the area without the obscuring raindrops. Some of the views down the mountain are simply breathtaking. It’s hard to believe you’re actually still in Shizuoka City and that you’ve got to where you were under your own steam.

We started our roll back down to central Shizuoka around half past five and, after getting drenched in another powerful shower, finally made it home. We had only seen two other hikers the whole time we’d been walking plus a solitary scooter on the high mountain road.

I’d highly recommend a trip here if you’re in the Shizuoka area. You can get a bus as far as Hirayama (there is only one you can catch in the morning), or cycle. From there, you can choose the hiking trail (if you’re feeling adventurous) or the regular road to Hoizumi Shrine, which actually had the best views of the day in my opinion.