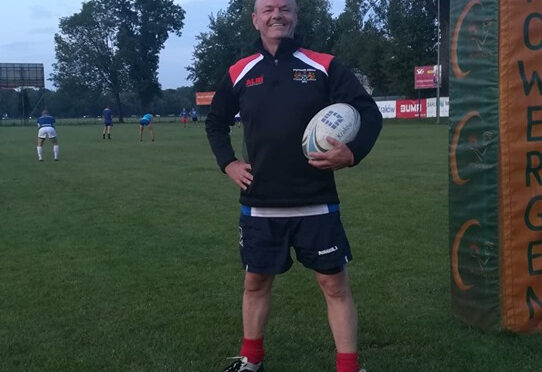 Today we take a look at the world of rugby and how it is continuing to grow outside its traditional heartlands. Our guest today is the evergreen Mark Bryan, who I once had the pleasure of playing footie and making music with during my time in Poland.

Back in the day he played scrum-half, but now he’s in more of an ambassadorial role. That doesn’t mean he’s taking things easy. He still attends a training session with the rugby team, shores up the defence of my old football team and gives his drums a pounding once a week.

TM-How did you get into rugby in the first place?

MB-I started playing rugby at 12 years old. My school only offered rugby, cricket and tennis. I played all of them but mainly rugby.

TM-That’s great. Any links with your hometown, Plymouth?

MB-This year Plymouth Albion RFC (National League 1) sent a delegation to open up relations with Juvenia. Two young Juvenia players went to Albion for training and even got a game! There will be more exchanges in the future.

TM-How do you see the future of rugby in Poland?

MB-Polish rugby has a bright future, especially in Krakow. The Ekstraliga has 9 teams and we get attendances of up to 500 people for our home matches. Polsat TV are now broadcasting Ekstraliga matches live and Juvenia’s grassroots program is well developed, with over a 100 youngsters participating.

TM-Who are you supporting at the RWC?

MB-Naturally I’m supporting England, who will do well to get past the group stage. The rest is, as we say, on the day!

TM-Do you have a second team?

MB-Of course. My second team is Japan because of that memorable try to beat South Africa in 2015

TM-What are their prospects for the tournament in your opinion?

MB-Japan has a sporting chance of qualifying. This group will be decided on who makes the fewest mistakes. Scotland look beatable and Ireland formidable. The game with Samoa will be interesting.
(This interview was conducted before the Ireland vs Japan game.)

Where next?
Steve’s mission to support local bands in Poznan and Teesside.