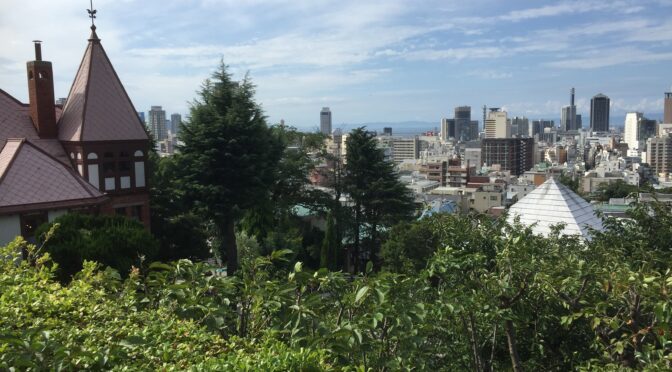 According to my pre-trip reading, this was supposed to be one of the most, if not the most livable city in Japan for expats, but lacking in major attractions. On reflection, I’d say that was a fair call, although it was hard to judge the standard of life here on just a flying visit.

The station in the centre of town is Sannomiya (although the Shinkansen arrives at Shin-Kobe) and since I had the cheap JR Seishun-18 ticket, it was here that I alighted. A short walk up the hill brings you to a strange district known as Kitano, which contains various examples of western style houses from France, Italy, England, Denmark, Austria etc.

Having grown up in Europe, these houses looked remarkably normal and unimpressive to me, although it was admittedly a little intriguing to see the Japanese eagerly snapping photos of them. Naturally, I did not fork out the steep entrance fees to go inside the buildings, but I did climb up to the Shinto shrine at the top for some nice views out onto Osaka Bay.

I may have had some beef with the houses, but I had no beef with the beef. Kobe is famous across Japan for its marbled meat and I purchased a little of it (a proper serving at a restaurant would have blown a few days’ budget) in the souvenir shop at Shin-Kobe station  to eat at the nearby waterfall.

Well, that was the plan. I was a little blasé reading the instructions to get there and went over the station instead of under it and ended up following a completely different road uphill.

After climbing for about 30 minutes, drenched in sweat, I decided I had probably gone the wrong way. By this time, I was way up in the mountains by a stream all on my own, which was, as it happened, a perfect place to stop for food.

I descended then ascended again, this time the right way. Nunobiki Waterfall was fairly impressive, but full of Japanese tourists and a few noisy children. I was not too disappointed I’d gone the wrong way earlier for my lunch.

The other thing that Kobe is known for is the devastating earthquake that struck here in 1995. I can still remember seeing images of the damage on TV in England as a 13-year-old. I witnessed no lingering effects during my visit and the town seemed to have confidently moved on.

Kobe. It was nice enough for a day out, but all in all nothing spectacular.